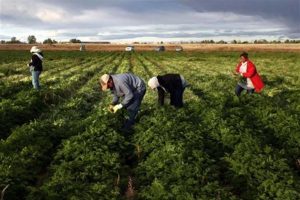 As part of the stimulus package approved on Wednesday 13th by the Italian government to revive the national economy, seriously damaged by the Coronavirus effects, an amnesty has been approved by the coalition’s Government in order to regularize thousands of undocumented migrants which will now be allowed to request a temporarily work permit to stay in Italy.

Article 110 bis of the so called “Relaunch” Decree provides for an amnesty for the emergence of irregular employment relationships of immigrants. Between June 1 and July 15 of 2020, employers and workers can submit a special request for regularization, whose modalities will be defined in a special Ministerial decree. The measure exclusively concerns the following economic sectors: agriculture, breeding and zootechnics, fishing and aquaculture and related activities; personal care for themselves or for family members, even if not living together, suffering from diseases or handicaps that limit their self-sufficiency and eventually domestic work to support family needs.

There are two procedures. The first concerns employers who may apply to declare the existence of an irregular employment relationship, or to conclude a contract of employment with foreigners illegally present in Italy. This is on condition that the foreigners have not left the territory since March 8 2020, have undergone digital fingerprinting procedures before March 8 2020 or have stayed in Italy before that date on the basis of a declaration of presence.

The second procedure concerns individuals whose residence permit, which has not been renewed or it has been converted into another residence permit, has expired since 31 October 2019. They may apply to the Police Headquarters to apply for a temporary residence permit of 6 months, provided that they are present on the national territory on 8 March 2020, have not been expelled from Italy since the same date and have worked in the sectors mentioned above before 31 October 2019. The temporary work permit will be converted into a residence permit for work purposes if the foreigner is able to produce a contract of employment. The application is made upon payment of a flat-rate contribution of Euros 160 and a maximum charge of Euros 30.

The applications will be inadmissible for employers convicted in the last 5 years, even with a non-final sentence, for a series of offences including aiding and abetting illegal immigration, the exploitation of prostitution and the recruitment of minors to be employed in illegal activities, as well as for foreigners against whom an expulsion order has been issued or who are considered a threat to public order or the security of the State.