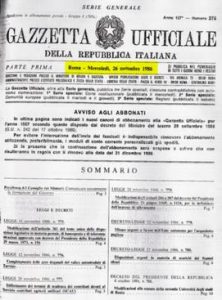 The new Immigration Decree has been published on the Italian Official Journal. It provides for the abolition of the residence permit for humanitarian reasons, deferring the jurisdiction to the territorial Commissions and Police Stations to evaluate with excessive power of interpretation the cases in which there would be “serious humanitarian reasons” or ” serious reasons, in particular of a humanitarian nature or resulting from constitutional or international obligations of the Italian State”.

This permit is replaced by a “special permit” lasting one year for victims of serious exploitation, health reasons, domestic violence, disasters in the country of origin, medical treatment, and acts of particular civil value.

The decree also provides for the denial or revocation of international protection against migrants who have committed crimes such as those listed: sexual violence, mutilation of female genital organs, resistance or violence against the public official, serious and very serious injuries, robbery aggravated theft including those in housing and drug trafficking. In addition, the asylum application is suspended in the event of social harm or conviction at first instance.

The stay in the Repatriation Centres (CPR) is increased from three to six months to facilitate the expulsion of illegal immigrants.

The revocation of Italian citizenship would be applied to foreign citizens who are considered a threat to the National Security, having been convicted of serious crimes committed for terrorism or subversion purposes.